Fixing a bug in PulseAudio's RTP sink on FreeBSD

To play music in the Zeus WPI space, we had a Linux machine connected to the speakers running PulseAudio. PulseAudio was configured to pass-through the audio it received from the Bluetooth receiver. Since some of our members don’t have a working Bluetooth implementation on their device, we also used module-native-protocol-tcp: this enables you to directly connect to the server and play your audio via PulseAudio’s native TCP protocol.

Unfortunately, this suffers from frequent stuttering when using it over Wi-Fi: if a packet drops, all other packets can’t be played until the dropped packet is retransmitted. These drops got annoying after a while, so we also set up an RTP (Real-time Transport Protocol) sink in PulseAudio. RTP is a protocol for real-time delivery of audio (and video) over IP networks. It uses UDP, so if a packet drops, the sink just considers that packet as lost and doesn’t have to wait until it eventually arrives after a short while. It then (probably, I haven’t verified this) interpolates the missed packet so the missed packet is less noticeable. This worked great while it lasted, but then the Linux machine running PulseAudio broke down and we replaced it with a new machine running FreeBSD, thinking that since PulseAudio also ran on FreeBSD, it would be easy to get running again.

The FreeBSD server for some reason did not play RTP streams anymore, so here our debugging adventure begins.

I suspected networking issues, so I dumped the RTP packets arriving on the FreeBSD into a pcap file with tcpdump:

It became clear that the RTP packets were arriving on the host, but PulseAudio was not listening on that port. After reading up some more about how RDP works, there are apparently two parts to RTP streaming: the RTP stream itself, containing the audio; and at a regular interval an SAP/SDP (Session Announcement/Description Protocol) packet containing information about the RTP stream (the type, name, and importantly for us, the port). I then suspected that something went wrong with the SAP packets in PulseAudio, since there was no ‘this port is closed’ ICMP packet for the SAP packets. 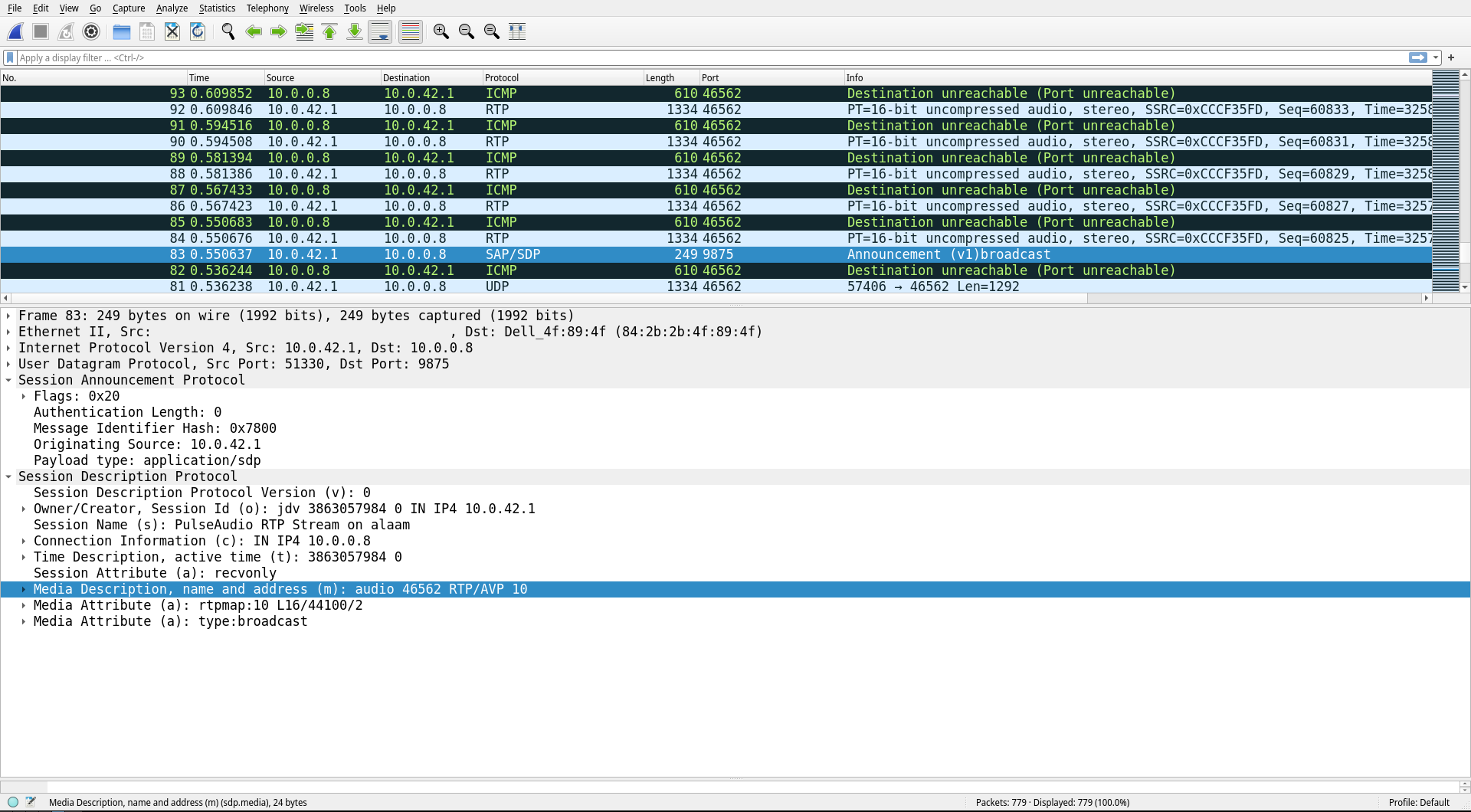 After some searching, I found the PulseAudio logs in /var/log/messages, and now the line pulseaudio[41410]: [(null)] sap.c: recvmsg() failed: size mismatch made sense: receiving the SAP message failed, so the port that’s supposed to receive the RTP packets never gets opened. After some searching for that error message in the PulseAudio codebase, this is the code that prints the error message:

Somehow, the size returned by ioctl(c->fd, FIONREAD, &size) and recvmsg(c->fd, &m, 0) were not the same. I then wanted to insert some logging code to figure out what both functions returned, but to do that, I would need to recompile PulseAudio from source. Luckily, this is very easy on FreeBSD: you fetch the build description of all packages, then cd into the directory the package you want to build is in and run make. It will then fetch the source, interactively ask you some questions about what features you want to compile and compile the package. The source and built binaries will then be in the work/ subdirectory. I had an issue where I edited the source and executed make again, but the code didn’t recompile. Some nice people in the FreeBSD Discord told me to remove the work/.build_done* and work/.stage_done*, this worked.

A debug print showed that the FIONREAD ioctl returns 255 as the size of the next packet, but the recvmesg call only returns 207 bytes. The packet trace also shows that the UDP packet is 207 bytes long, so somehow the FIONREAD ioctl is not returning the size of the next packet. This code did work on Linux, so there must be some differences in the ioctl on Linux and FreeBSD; and indeed:

The FIONREAD size reported will always be bigger than the size of the packet to be received with recvmesg, so for now, I commented out the goto fail; in the size checking code. The SAP packets did get accepted and the RTP port was opened, but still no sound played. Worse yet, there were also no more error messages in the logs. Suspecting that something similar might be happening in the RTP receiving code, I grepped for FIONREAD in the PulseAudio codebase, and indeed, it was the same problem. Also commenting out the goto fail: check there fixed the issue: audio now finally played 🎉🎉.

I properly fixed this by removing the size checking code: the FIONREAD will then be a lower bound for the size of the packet. For safety, I also added an upper bound of 1<<16: the contents of a UDP packet will never be bigger than that (the actual upper bound is a bit smaller, but I couldn’t be arsed to figure it out).

I hope my patch to fix PulseAudio’s RTP source will get accepted, so that we can run the packaged version of PulseAudio again instead of the binary built from the modified source.